King of the Wasps is off to France 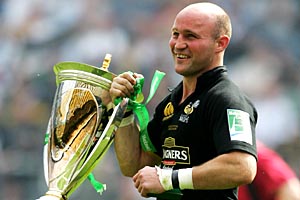 King, who completed his eleventh and final season at Wasps with a victory in the Heineken Cup in May, was out of contract at the end of the 2006-7 season and will join French side Clermont Auvergne on a one year contract next month.


The fly half’s choice of future club brings with it another dramatic twist in Wasps Heineken Cup history, as it means that King will be facing his old club in Pool 5 of the 2008 Heineken Cup within months of making the move.

In addition, King and Director of Rugby Ian McGeechan have made public plans that will hopefully bring the fly half back to Wasps once his playing days are done.

Speaking on his decision to leave Wasps, King said, “The end of last season wasn’t quite the right time to decide what I was going to do. I wanted to be able to focus purely on preparing for the Heineken Cup Final and after that was over, obviously things were then very emotional.

“The victory at Twickenham was a great day in the history of the club, and one that is very special to me, one that I am proud to have been a part of. Since then I have taken some time off and reflected a bit on what I should do in the coming season.

“When the offer came in from France I could see that it would be a fantastic opportunity to gain some new experiences and hopefully see things from different perspectives, things which will be especially important to me as I do plan to pursue a career in coaching once I’ve retired.

“So I’m hoping this will be an experience that will stand me in good stead, and allow me to see new things and learn new things – things that can be beneficial to both parties if I ever do want to come back to Wasps and do some coaching.

“However, I thought long and hard about the decision, and I do believe this is the best thing for me and my family. The added bonus is that I was able to go out on such a high, winning the Heineken Cup at Twickenham.

“I’ve worked with some of the best people in the game, and played for one of the best rugby club’s in the world. It has been a fantastic eleven years, but hopefully I will be back at Wasps one day.”

Director of Rugby Ian McGeechan said of the fly half’s departure: “This is a great opportunity for Alex to do something different, and he goes with our blessing.

“Alex has been instrumental to Wasps’ success over the past decade, and he has come to personify the ethos of the club. There is surely no better way to finish your time with a club than to kick the winning points and collect a second Heineken Cup winner’s medal in front of a record breaking 80,000 people.

“I’m sure everyone at the club and all our supporters join me in extending to Alex a huge thank you for everything that he has done for the club in the last eleven years, and we wish him well in his move to France.”

During his time at Wasps, King became the most decorated fly half currently in the club game, having won everything English club rugby has to offer. His roll call of winners medals includes two Heineken Cups, four English league titles and two English knock out cups, plus the Anglos Welsh Cup in 2006 and the European Challenge Cup in 2003.

King is the only Wasps player to be awarded an ERC Elite 50 caps award for 50 appearances in Heineken Cup competition.