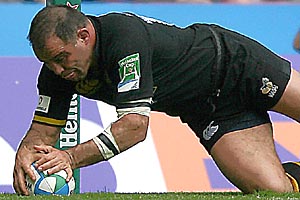 It continues a remarkable renaissance for Ibanez, who has won the first club silverware of his career, by winning the Heineken Cup, and resurrected his international fortunes since joining Wasps two season ago.


Having previously captained France in the 1999 Rugby World Cup, when they finished as runners up to winners Australia, Ibanez went on to collect 72 caps for his country before retiring from international competition at the end of the 2003 World Cup.

Having joined Wasps however, Ibanez came out of international retirement for the Autumn internationals of 2005, and has since increased his total number of caps to 90. In 2006 he helped France to victory in the Six Nations tournament, and in 2007 found himself lifting the trophy as skipper when previous captain, Fabien Pelous was unable to take part in the tournament due to injury.

The decision to make Ibanez captain for the Rugby World Cup 2007 comes amidst continued concerns for the fitness of Pelous, a close friend of the Wasps man.

“We just were not sure until the last moment that Fabien would be fit enough and we did not want to put more pressure on him,” said team manager, Jo Maso.

“The fact that the two of them are the best of friends made it a lot easier to make the change.”

Maso added that Pelous did not officially have the title of vice-captain but added: “If Raphael isn’t there, Fabien will be captain for that match.”

France have never won the world crown, having twice been runners-up (in 1987 and 1999) but after sealing this season’s RBS Six Nations victory with a thumping win over Scotland, they have high hopes for the World Cup on home turf.

Ibanez’s team have been drawn against Ireland, Argentina, Georgia and Namibia in Pool D, and begin their campaign against the Pumas on September 7.