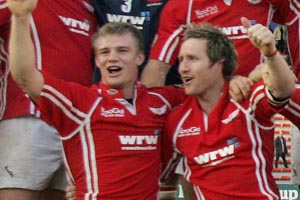 Heineken Cup fever has gripped West Wales and even spread as far as Ireland as demand for their semi-final in Leicester has been greater than they have ever known. - 17/04/2007 10:09

Heineken Cup semi-finalists Llanelli Scarlets have received the green light to go-ahead with the building of a new 13,500 seater stadium.

An exciting new era beckons for the Heineken Cup semi-finalists now they’ve finally had the thumbs up to move to a 13,500, all-seater ground.


The Welsh Assembly yesterday approved controversial plans for up to 450 homes to be built on the site of the Scarlets’ current home at Stradey Park.

Selling Stradey to a property developer will finance the construction of a state-of-the-art stadium in the Pemberton area of Llanelli. And it will also clear the region’s debts, which are upwards of £6m.

The Scarlets now hope their new home will be ready for them to move into for the start of the 2008-09 season.

Chief executive Stuart Gallacher said, “We are delighted that the Welsh Assembly Government has delivered a decision that will secure top-class rugby for the people of our region.

“We have waited desperately for this day and, after a long, arduous and costly planning process, we can now push on to an exciting future.

“We took a lot of positives from our on-the-field performances last season, in particular, the Heineken Cup campaign which gave the coaching team, players and fans so much heart.

“The new and enhanced revenue streams available to us at a new stadium will ensure the Scarlets can also begin to compete with the best in Europe on a commercial basis.

“The Pemberton development will create excellent sporting and recreational facilities that will be in use seven days a week and benefit the whole community.

“It will help encourage investment, modernisation and stimulate other new developments that will, in turn, create jobs and better lifestyles for people living here.”