Jones unfazed by Group of Death 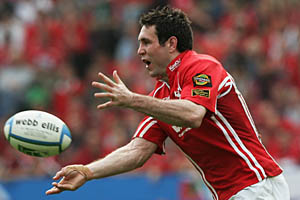 Scarlets star Stephen Jones is unfazed by the daunting task awaiting Phil Davies’s side in next season’s Heineken Cup.

The Scarlets have been drawn in the Group of Death alongside reigning champions London Wasps. With ex-champs Munster and Challenge Cup victors Clermont Auvergne making up the group, Pool 5 is without doubt the toughest combination drawn.

“Our results last season speak for themselves,” said former Clermont No10 Jones. “We shouldn’t have to fear anyone and it is games like those against Wasps, Clermont and Munster which you want as a player. I’m already looking forward to them.”

Scarlets Chief Executive Stuart Gallacher added: “It doesn’t come any tougher than this draw. Pool 6 is pretty tough with Leinster, Leicester and Toulouse alongside Edinburgh but the Scarlets have without doubt been handed a tough assignment.”