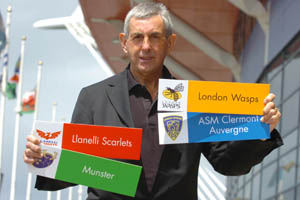 London Wasps' Ian McGeechan would dearly love his side to become the first English team to life the Heineken Cup three times - 30/10/2007 18:22

Declan Kidney knows what it takes to win the Heineken Cup. He steered his side to European glory in Cardiff in 2006, and has set his sights on a return to Wales in May next year.

The Munster coach knows that for that to happen, his side will have to get past some of the toughest teams in the competition.


“In terms of the draw itself, we’ve landed ourselves a very tough one with the title holders (Wasps), the up and coming French side, Clermont Auvergne just beaten in the French championship final and then Llanelli Scarlets whose record in the competition speaks for itself never mind the fact that they put us out of the competition last season,” said a pensive Kidney.

This was a view echoed by Munster stalwart Alan Quinlan. “I don’t believe we could have gotten much harder sides,” he said.

“We have first hand knowledge about Llanelli and Wasps, two top sides, and although we haven’t played Clermont, their reputation precedes them.

“It seems the level rises season and it gets harder and harder and one thing is certain there will be no problem with complacency from our point of view.

“Only one side can come out of this group and in the end bonus points could decide that. So there’s really no margin for error, no room for an off day. I just can’t see any weakness whatsoever in any of our three Pool opponents. It’s going to be a huge ask to qualify for the knock-out stages but like any other year we’ll give it our best shot.”