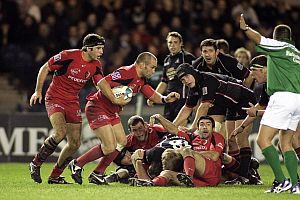 Edinburgh hooker Ross Ford says his pack are looking forward to testing themselves against last year's finalists Leicester to see if they have improved in the last six weeks. - 11/01/2008 17:19

The draw for the Heineken Cup has thrown up some familiar foes for Edinburgh, as they will face Toulouse for the fifth time in next season’s competition.

The Scottish capital club will also meet Leinster for the second successive campaign, and this year’s finalists and Guinness Premiership champions Leicester Tigers.

Speaking about the Pool stage, head coach Lynn Howells said: “After the surprise of the draw, I think everyone is now trying to think of a more suitable phrase than the ‘group of death’! Everyone here is really excited about the prospect of playing this standard of opposition.

“As in all competitions you have to play the best to win a competition, and this group gives us the opportunity to play the best in the early stages of the Heineken Cup. Having said that, we’ve proved we’re capable of beating both Toulouse and Leinster at home so I’m sure none of the teams will relish coming to Edinburgh.”

The 13th Heineken Cup tournament kicks-off with the Round 1 matches on the weekend of 9/10/11 November 2007. It was also announced today that the final will be played at the Millennium Stadium in Cardiff on the weekend of 24/25 May 2008.