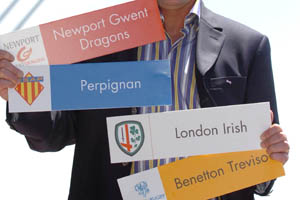 Dragons coach Paul Turner revealed he was “satisfied” with their Heineken Cup draw.

The Gwent region, after qualifying via a play-off victory over Calvisano in Newport last month, couldn’t have got a better draw after avoiding the big guns to be paired with Perpignan, London Irish and Treviso.


But Turner was at pains to play down the chances of the Dragons making the knockout stages of the Heineken Cup for the first time in their history.

He said: “It’s a huge competition with such great teams. Whatever group you are in, you have got to manage expectations.

“I am not jumping around with joy but I’m satisfied with the draw. We know where we are as a team, we are a developing team and need new faces in.

“But it’s certainly a group we can get our teeth into and look forward to.”

Wales’ lowest-ranked team have the kindest draw of all the Welsh regions, with French side Perpignan favourites to progress as pool winners.

He was only too aware Overmach Parma beat them to a place in last season’s tournament and were given a tough time from Calvisano in the race for European Cup qualification recently.

Former Wales international fly-half Turner added: “After facing Calvisano in that last game, everyone is well aware of the strength of Italian sides.

“Italian rugby has come on in leaps and bounds with sides like Treviso having a huge southern hemisphere influence Having watched them in the past, I know it is not an easy place to go and play.

“London Irish I know all about from my decade in England. The games against them are going to be big, home and away.

“Perpignan? The Dragons have been there before and it is always a huge and physical battle in the south of France.”