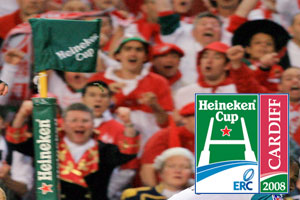 ERC, Heineken Cup organisers, are delighted to announce that the Millennium Stadium, Cardiff, will host the 13th Heineken Cup final on the weekend of 24 / 25 May, 2008.

The WRU and the Millennium Stadium won the bid to host the world’s biggest club rugby final, which will return to the Welsh capital for the fifth time.


Cardiff hosted the first two Heineken Cup finals, when French clubs Toulouse and Brive won the coveted trophy, and then when Leicester Tigers triumphed in 2002 and Munster’s magic moment in 2006.

That 2002 Leicester Tigers against Munster final was played in front of a then tournament record crowd of 74,600 and in 2006 the stadium was full to capacity for Munster’s victory over Biarritz Olympique. The 2006 final had an economic impact of more than £25 million on the Welsh economy making it the single richest one day sporting event Wales has hosted.*

Tickets for the Cardiff 2008 Heineken Cup final at the Millennium Stadium went on pre-sale today Wednesday, 20 June to supporters who have previously purchased tickets early through Ticketmaster for the Cardiff 2006 and London 2007 finals.

ERC and the WRU are offering a “early bird cash back” ticket scheme for the Heineken Cup final for rugby Clubs across the six participating nations.  The initiative will allow Clubs earn up to 30% cash back on tickets sold direct to their fans from September to Christmas.

“We are delighted to be going back to Cardiff for the 2008 Heineken Cup final,” said ERC Chairman, Jean-Pierre Lux.

“We have already staged four hugely successful finals in the City of Cardiff and it will be exciting for all the clubs in the tournament to be aiming to play at the magnificent home of Welsh rugby.

“Following on from the successful partnership model adopted for Cardiff 2006 final two years ago, ERC will be working in partnership with the WRU, Millennium Stadium, Welsh Assembly Government, and Cardiff Council to create a festival of European Rugby for weekend for the Cardiff 2008 Heineken Cup final.

“We had a world record crowd for a Rugby Union club match of 81,076 to see London Wasps beat Leicester Tigers last month with fans from all over Europe joining Wasps and Tigers supporters in creating a wonderful atmosphere.   Working with the WRU, we are once again setting a full house at the Millennium Stadium and another memorable occasion as our target for next May.”

WRU Chairman David Pickering said: “Anyone lucky enough to be at the 2006 final when Munster finally claimed their Holy Grail will remember the unique and special atmosphere of a Heineken Cup final weekend and it is a privilege for the WRU to host the most prestigious club fixture in the world.

“It promises to be another amazing day at the Millennium Stadium and rugby fans of all nationalities will be able to enjoy watching Europe’s two finest clubs in a world class stadium with world class facilities. Given the success of recent Heineken Cup finals we suggest fans buy their tickets early to avoid disappointment.”

Cllr Nigel Howells, Executive Member, Culture, Leisure and Parks for Cardiff Council, said: “The memory of Munster’s win in the 2006 Heineken Cup final is still fresh in everyone’s mind in the city. It proved that Cardiff is truly one of the sporting capitals of Europe. We look forward to welcoming two more great teams to the 2008 final, as well offering their fans some of Cardiff’s famous hospitality”.

The 2006 Heineken Cup between Munster and Biarritz Olympique at the Millennium Stadium had an economic impact of over £25 million on the Welsh economy.
Research produced by the Welsh Economy Research Unit, part of Cardiff Business School, reported that Cardiff had benefited by £17.7 million and the rest of Wales by £7.4 million.
The report on the 2006 Heineken Cup final declares it “can be considered the most important single day event at the stadium to date in terms of spectator impact.

French (Toulouse and Brive), English (Leicester Tigers) and Irish (Munster) teams have won both previous Heineken Cup finals at the ground.
A total of 644,598 fans have gone through the turnstiles for the 12 Heineken Cup finals – an average of 53,717 per match.
The four previous finals in Cardiff have been watched by 212,598 fans – next May’s showpiece occasion could take that figure beyond a quarter of a million.