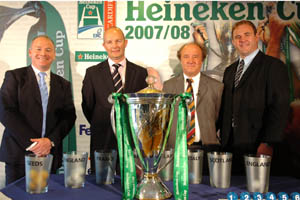 Reigning Heineken Cup champions London Wasps will be up against ASM Clermont Auvergne, Llanelli Scarlets and Munster in Pool 5 when the 13th Heineken Cup tournament kicks-off with the Round 1 matches on the weekend of 9 / 10 /11 November, 2007.


The draw kept the top seeds from each of the six nations apart with Wasps, Stade Français Paris, Leinster, Benetton Treviso, Glasgow Warriors and the Ospreys heading up the six Pools of four teams.