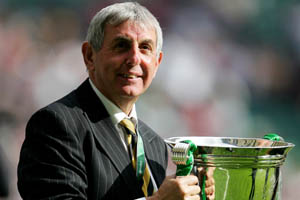 London Wasps Director of Rugby today hailed the achievement of 11 of his Heineken Cup winning squad in being selected for the England Rugby World Cup preliminary squad.

With seven forwards and four backs picked for the England squad, Raphael Ibanez confirmed in the French squad and Dan Leo and Eoin Reddan in the frame to be selected for the Irish and Samoan squads respectively, McGeechan will be without 14 of his most talented players throughout a large part of Wasps pre-season preparations, though some of those players could well come back to the club when Brian Ashton reduces his squad to 30 in August.


Reacting to the news of his players’ selection, McGeechan said, “Obviously I’m delighted that so many of our Wasps players have been recognised. It’s a reflection of how well they all played in the final three months of last season, and of how effectively Wasps can play as a team when we have all our players available.

“I’ve also no doubt that the way we performed in the Heineken Cup Final has had an impact on selection and on how certain of our players are now viewed. I’m particularly pleased for Danny Cipriani, Simon Shaw and Fraser Waters, but as a whole this reflects well on Wasps and underlines our ethos as a club, which is to bring players through to play for England.”

The hefty Wasps contingent may have raised a few eyebrows across the country, but McGeechan was not surprised at the number of Wasps players who figured in the England 47.

“I’m not surprised at the number of players we have in the squad,” he said.

“England’s preparations for the World Cup campaign are beginning now, and so you have to look at the players who are performing now. England need players who can deliver the goods on the big stage, and Wasps’ players have proved in the last few months that they are capable of delivering on the big occasions. I’m sure that’s what Brian Ashton wants.”

That such a large number of Wasps squad will be absent for at least a large part of their pre season preparations will also pose a tough challenge for the club’s coaches, however.

Said McGeechan: “We will have a very small squad for the first two months of the season and that will put a lot of pressure on us. Yes, we will in all likelihood get some of those players back in mid-August, but in the meantime we have to prepare for the new season without them, so we will need to be very focussed on what we are about.”