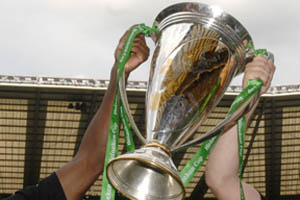 The draw to decide the 2007 / 2008 Heineken Cup Pools will take place on Wednesday, 20 June, at the Millennium Stadium, Cardiff.

ERC Chairman Jean-Pierre Lux will conduct the draw which will decide the composition of the six Pools of four teams each for the 2007 / 2008 Heineken Cup Pool stages.


The six top seeds from the six nations will be kept apart at the head of the six Pools.

No two teams from the same country will be drawn in the same Pool except for the seventh English club who could face any of their six domestic rivals.