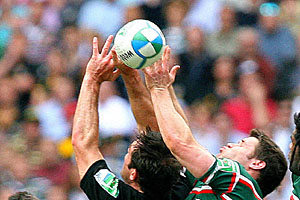 Take the time to recap on the Heineken Cup season with new records for the players, the fans, the venues and other interesting facts from 2006/07.


A tournament record 716,447 fans attended the 72 Pool stage matches – 56,643 more than the old high set in 2005 / 2006.
Stade Francais Paris hosted Sale Sharks in Round 3 and set a new record Pool match attendance of 44,100 at Parc des Princes.
Cardiff Blues hosted Leicester Tigers in Round 2 at the Millennium Stadium in front of 26,645.
Switzerland became the ninth country to host Heineken Cup action and the Stade de Geneva was the 80th tournament venue when Bourgoin welcomed Munster in Round 5.
This season saw European squad sizes increase from 36 to 38 and allowed for an “Additional Player” to be introduced during the Pool stages.
55 Heineken Cup games were televised in full this season.
A total of 419 tries were scored in all 79 Heineken Cup matches with 24 of these in the 7 knock-out games.

A world record crowd for a Rugby Union club match of 81,076 went through the Twickenham Stadium turnstiles for the London 07 final.
France and Wasps hooker Raphael Ibanez is the first front five forward to score a try in a Heineken Cup final.
Wasps full back Daniel Cipriani (19 years, six months and 18 days on 20 May, 2007) was the fourth teenager to feature in a winning Heineken Cup final match day squad. But he was only the second to see action on the pitch as Cedric Heymans (Brive, 1997) and Ricky Pellow (Bath 1998) were not required to come off the replacements bench. Cipriani is the youngest to play in a final as Ollie Smith was three months older when he played for Leicester against Munster in 2002.
A total of 644,598 fans have been at the 12 Heineken Cup finals, with 21,800 fans attending the first final in Cardiff Arms Park in 1996.
There are 223 players from the 12 match day 22-player squads who own Heineken Cup winners medals. Eight Wasps players – Fraser Waters, Josh Lewsey, Tom Voyce, Alex King, Simon Shaw, Joe Worsley, Mark van Gisbergen and captain Lawrence Dallaglio – now make it 43 players who are double medal winners.
Wasps have never lost a European final in three appearances, winning the Heineken Cup in 2004 and 2007 and the European Challenge Cup in 2003.
The London 07 showpiece final was televised in over 100 countries.
The 2006 / 2007 final was the 819th tournament match.