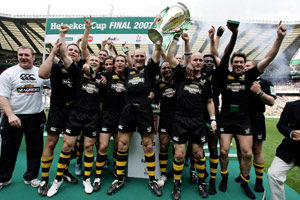 London Wasps became champions of Europe for the second time by beating Leicester Tigers 25-9 in front of a world record crowd of 81,076 at Twickenham on Sunday afternoon.

Ibanez was at the heart of both of Wasps’ tries – scoring the second – as Leicester fell at the final hurdle of their bid for an historic treble.


The Tigers had the Guinness Premiership and EDF Energy Cup trophies in their cabinet but Wasps never looked like giving up their early lead in front of a tournament record 81,076 fans.

Tigers fly-half Andy Goode and opposite number Alex King traded early penalty goals as the two heavyweights of European rugby introduced themselves for the third time in Heineken Cup history, but the huge contingent of Leicester fans were stunned into silence on the quarter mark.

French skipper Ibanez flipped in a pinpoint lineout throw to scrum-half Eion Reddan, who had an untouched run to the tryline.

And, just as the Tigers started to gain crucial possession and territory, they were embarrasingly left floundering by the same move. This time, Ibanez threw the ball in high to Simon Shaw, who flicked it back to the veteran hooker for another score in the corner. King failed with both sideline conversions, and a third penalty goal from Goode narrowed Wasps’ lead to 13-9 at the halftime break.

King extended the lead with a penalty goal, early in the second spell and Tigers’ fans began thinking that is wasn’t going to be their day when Goode missed a goal from a handy angle.

Soon after, King slotted his third goal to give the underdogs a ten-point lead  going into the final half hour, and he added a drop goal as the game began to slip form the Tigers.

A great run from Wasps replacement James Haskell set up King for another goal and Lawrence  Dallaglio started work on his victory speech.