Dragons through to top tier rugby 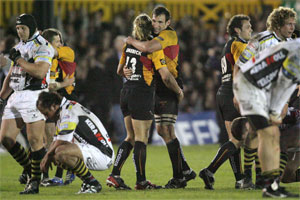 For the second season running American centre Paul Emerick scored the play-off try to put his side into the Heineken Cup, but this time it was for the Newport Gwent Dragons.

For the second season running American centre Paul Emerick scored the play-off try to put his side into the Heineken Cup, but this time it was for the Newport Gwent Dragons.

In last season’s play-off game he put Italians Overmach Parma through by beating the Dragons, but at Rodney Parade this year he scored the injury time try which handed the Welsh region the 24th place in next season’s premier European competition.

It came just when it seemed extra time was inevitable and was as dramatic a finale as possible to set up a weekend of European finals action.

It was harsh on Calvisano who dominated for much for much of the game, but the Dragons showed tremendous spirit and they responded to the crowd’s passionate support by coming through from 15-3 down just after half-time.

The Italians opened the scoring after just three minutes with Italy back Roland de Marigny landing a 40 yard penalty after the Dragons infringed at a ruck.

There was more bad news for the home side when their captain, Wales full back Kevin Morgan, was forced off after 13 minutes to be replaced by Aled Thomas.

Calvisano continued to dominate territory and possession, but were unable to turn that pressure into points as De Marigny missed an easier penalty kick from in front, 40 yards out.

The outside half was not to be put off and had another go from inside his own half on the half hour mark, but the kick fell a few feet short.


The Dragons then equalised from their first piece of real pressure in the Italian 22 all game, outside half Ceri Sweeney was obstructed after his own kick ahead and he landed the penalty from in front of the posts.

However Calvisano got the first try of the game just before half-time through left wing Warren Spragg. He was put in a by a long pass from centre James Downey after prop Gabriel Bocca made the initial break up the middle.

The final act of the half was another missed chance for the Italians, replacement outside half Michael Gallinetti missing a 50 yard penalty attempt.

However Calvisano scored a try early in the second half to extend their lead. Lock Valerio Bernabo was too shrugged off the tacklers on a 15 yard run to the line after Gallinetti and Spragg had combined down the short side to make the opening.

De Marigny converted from touch to make it 15-3 to the Italians. The Dragons replaced Wales lock Ian Gough, playing his last game for the region before moving to the Ospreys over the summer.

The Dragons needed a score to have any hope of getting back into the game, but a moment of magic from right wing Gareth Wyatt brought that much-needed try.

He collected his own kick ahead from turnover ball to almost make it to the line on the right and then the ball was spun wide to the left for fellow wing Martin Thomas to cross the line after a long cut out pass from Sweeney.

Sweeney converted from near touch to further inspire his side as they got back within a score.

As the crowd started to strongly get behind their team the Dragons came back with their best period of the match.

They got their reward with a try by lock Luke Charteris as he powered his way through to the line following an extended period of forward pressure in the Italian 22.

That put the scores level on 15-15. Sweeney missed the conversion from touch and then De Marigny missed a penalty shot from similarly wide out.

Then came the decisive moment of the game as the crowd again roused the home team to greater efforts. The forwards piled on the pressure and when the ball went wide Aled Thomas’s pass was latched onto by Emerick and he had the power to get over the line.