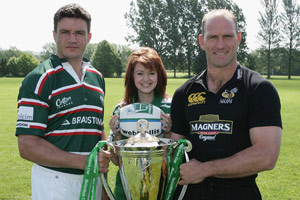 The secretary of Bletchley RFC thought it was a wind up when he was asked if his club would host a photo-shoot involving Martin Corry and Lawrence Dallaglio with the Heineken Cup. - 18/05/2007 18:21

The secretary of Bletchley RFC thought it was a wind up when he was asked if his club would host a photo-shoot involving Martin Corry and Lawrence Dallaglio with the Heineken Cup.

And when he heard that Miss London was going to be joining them his suspicions were aroused even more.

“When I was asked if we would like to host the shoot my first reaction was ‘yes’. Then I started to get nervous,” admitted Davies, whose club was chosen because it is equidistant between Welford Road and Wasps’ London training ground in Acton.

“Three or four calls into the preparation for the event I began to get even more suspicious, but then I got some reassurance when I spoke to the press officer of one of the clubs. It was a huge honour for our club and it certainly caused a huge amount of interest around Bletchley and Milton Keynes.

“We’ve had a great season with promotion for our first and second teams. Hosting the Heineken Cup, two great England captains and Miss London provided the icing on top of the cake.”

There were plenty of club members at Manor Park to see Leicester Tigers skipper Corry and London Wasps captain Dallaglio look each other in the eye two days out from their Twickenham Stadium showdown. They were relaxed, complimentary of their opponents and very much looking forward to Sunday.

“Leicester look really hungry for success. They hadn’t won anything for three or four years, but they are certainly making up for that this season,” said Dallaglio.

“The Wasps ethos is a simple one – we want to win trophies and get players to play at the highest level possible. We know we are facing very worthy opponents on Sunday and that only our best will be good enough.

“We have the belief in our squad, we possess strong characters who don’t wilt under pressure and we are all going to enjoy what is going to be an awesome atmosphere at a packed Twickenham. It’s going to be special.”

Corry has already been called upon to lift two trophies at Twickenham already this season – the EDF Energy Cup and the Guinness Premiership Trophy. Now his Tigers are chasing an unprecedented treble.

“The Heineken Cup means a huge amount to us as players and to the Leicester fans. We aren’t looking back on what we’ve achieved to date this season, merely looking forward to Sunday’s showdown with Wasps,” said Corry.

“There is a lot of history between the two teams and a huge amount of respect also. Once this game is over we will be able to properly evaluate our season.”

While Corry and Dallaglio will definitely be in the thick of the action at Twickenham on Sunday, missing from the stands will be Miss London, Clair Cooper. One of the London 07 Final ambassadors, she won’t be able to cheer on her London Wasps favourites because of a prior commitment.

“While Lawrence and the boys are trying to win the Heineken Cup for a second time I’ll be wrapped up in the Miss Great Britain Pageant in London. I’ll be keeping my fingers crossed for a great game and hoping that the Wasps team I’ve been cheering on all season can match
the Tigers on the day,” said Clair.

If you want to vote for Clair in the Miss Great Britain Pageant then text “missgb14” to 80808.