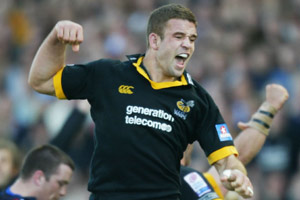 London Wasps flanker Joe Worsley says lifting the Heineken Cup three years ago is the best moment of his club career and that experience will help his team prepare this week. - 17/05/2007 12:07

London Wasps flanker Joe Worsley says lifting the Heineken Cup three years ago is the best moment of his club career and that experience will help his team prepare this week.

They will face Leicester Tigers in front of a sell-out 82,000 crowd at Twickenham, the venue of their 2004 victory over Toulouse.

“The Heineken Cup was one of the greatest experiences most of us have had when we won it last time and we are looking to repeat that, but it will be hard because Leicester are playing so well at the moment,” admitted Worsley.

“The fact we have done it once already makes it easier to deal with this time, the build up and the nerves.

“Winning the Premiership is a joy but my favourite memory is winning the Heineken cup and lifting the trophy.”

Having not reached the play-offs in the Guinness Premiership, Wasps have had three weeks off to build up to Sunday’s final. While they may be fit and rested, Worsley would rather have been putting his body on the line over the last couple of weeks.

“I would prefer to be playing week in, week out but that is something you have to deal with. Last time was slightly different because were playing up the week before the Heineken Cup last time and had less time to think about it,” he said.

“That is the situation we have got and we have had to deal with it.”

The last time Wasps played was a defeat at Leicester, something which they want to make up for.

“That was very disappointing. We let ourselves down in some areas and if we do not address them then we will be looking down the barrel again,” admitted Worsley.

“Hats off to Leicester, they have played very well this year. I am looking forward to this weekend, it is these games you play for. Without these games I really do not know if I would enjoy it so much.”