Heineken is “one true competition” – Edwards 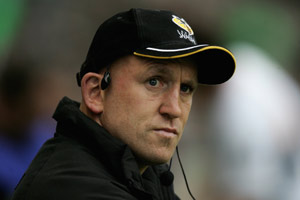 London Wasps head coach Shaun Edwards says the Heineken Cup is the one true competition because it is the only time full strength teams are picked for every game.

And the former Rugby League star believes Sunday’s final against Leicester Tigers will be decided by defence along with players putting their bodies in places they do not want to go.


“First and foremost you need a very strong defence, keep the right side of the referee and you have to sometimes put your body where it does not really want to go in terms of the pain and fatigue factor,” said Edwards.

“When you are getting fatigued and really getting to those duress levels you also have to execute the skills of the game that you are playing and that goes a long way to winning the big games.

“We have had that most of the time in Heineken Cup games when we have performed well. Obviously our league position was a problem but in most of the games you do not have your best team playing.

“The Heineken Cup is the one true competition where you do have all your best players available for all the games.

“The final is the biggest game of club rugby there has ever been in terms of revenue, numbers watching, media interest etc. We are very pleased to be part of it but we would like it even more if we win it.

“We are going into the game as underdogs, we accept that but it does not mean we are going to lose.”

Only Wasps stand between the Leicester Tigers and a treble of trophies, having already bagged the Premiership and the EDF Energy Cup. That gives Wasps an extra incentive apart from just the desire to lift the Heineken Cup.

“If they win all three then there would be no doubt the momentum has shifted their way whereas in the past few years the momentum has gone our way as regards winning trophies in what is a great rivalry in British sport,” admitted Edwards.

“The Heineken Cup every year is a marvellous build up, to be back at Twickenham is what you dream of at the start of the season.”