Skipper grabs chance to ‘save season’ 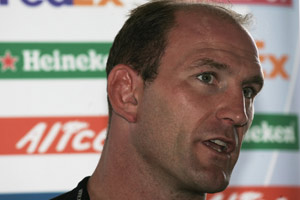 Former England captain Lawrence Dallaglio says this Sunday’s Heineken Cup final is a chance for London Wasps to save their season.

He admits things have not gone to plan as his side missed out on a place in the play-offs when they lost at Leicester in the final game of the league season, while the Tigers went on to claim the second leg of their double by adding the Guinness Premiership to the EDF Energy Cup.

They will be going for the treble on Sunday, but Dallaglio says the Wasps players will be pumped up to try to stop that and put a trophy in their own cabinet.

“Congratulations to Leicester, they have had a fantastic season and I am sure for them this would be the icing on the cake – for us it is a chance to put right a season which has not exactly gone to plan,” said the No 8.

“It is such a big prize at stake that if we were to go on to win it then we would count this season as a success.

“These are the days you live for, that you put in all the hard work for. There are only 30 players there on Sunday and there are a lot of players who will have their feet up – that’s what it is all about, being there when they give out the trophies and we have managed to do that in years gone by.

“Leicester have done it better than us this year but we have one more chance to have a crack at it. Leicester are bang in form, they have won trophies already this year and are clearly in the ascendancy.

“We have got enormous belief in our players, great characters and players who will certainly step up to the occasion.

“Whatever happens on Sunday, myself and my team will have given absolutely everything to have won the game and if we get beaten then we will have been beaten by someone who deserves it. If we win it will be one of our greatest achievements.”

Sunday’s Heineken Cup final between two English teams will be a showcase for the English club game and a sign of how important the competition is.

“I constantly bang on about this competition being the best competition in the northern hemisphere and I still hold that view,” said Dallaglio.

“We have two great clubs playing at the home of English rugby in front of the biggest ever crowd so something is infinitely right about this tournament.