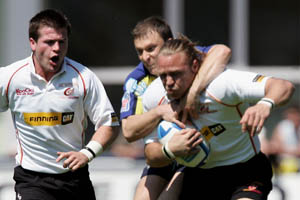 Newport Gwent Dragons have announced their sqaud for Friday's Heineken Cup play off game against Calvisano at Rodney Parade. - 16/05/2007 16:54

Newport Gwent Dragons have announced their sqaud for Friday’s Heineken Cup play off game against Calvisano at Rodney Parade.

The Dragons have been buoyed by the news that Kevin Morgan, Ceri Sweeney, Colin Charvis, Luke Charteris, Jamie Ringer and Adam Black have all recovered from their injuries which kept them out of The Dragons final Magners League game and are expected to make the starting line up for Friday night’s crucial game.


Dragons head coach Paul Turner said, “I think we are in better shape than last year when we lost our play-aoff with Overmach Parma. Naturally injuries will play a big part in how we fare but we have a number of players back like Colin Charvis, Kevin Morgan, Jamie Ringer, Ceri Sweeney, Luke Charteris and Adam Black which is a big boost to the squad.

“Calvisano have been involved in the Heineken Cup for six seasons and so will want to continue to be involved in that level of competition. They did reasonably well in Europe this season pushing the Ospreys twice in their group and they will bring their experience from that tournament into Friday night’s game.”

Definitely ruled out for the Dragons are Rhys Thomas, Nic Fitisemanu, Peter Sidoli and Ashley Smith while Gareth Cooper and Aled Brew have flown to Australia with the Welsh squad for their two test tour.

“We believe we can make next season’s Heineken Cup. That’s our target,” said Turner. “The squad deserve to be rewarded for their efforts of this season by securing top European rugby and whatever team takes to the field on Friday I am confident they will display the same desire and battling performances they have all season.”

Dragons No.8 Michael Owen said, “We end our season with a massive game and it is a must win one for us. The Heineken Cup is a fantastic tournament to be involved in it really is Europe’s Premier rugby competition. Having the chance to play against sides of quality is not only good for the players but also for supporters who can see first hand Europe’s top rugby players in action.

“The European Challenge Cup has been great for our development as a squad and for a number of youngsters who have made the step up to senior professional rugby, however, the Heineken Cup is the tournament we want to be in and we will be going all out to secure that on Friday night.”