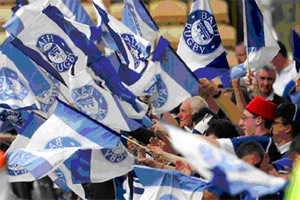 Bath back Scott Crockett says the recipe is there for a classic when his side travel to the Walkers Stadium to take on Leicester this weekend in the Heineken Cup quarter-finals. - 06/04/2009 20:41

Bath Rugby fans have been given 1500 free flags for their European Challenge Cup final at the Stoop on Saturday.

Club officials were so pleased with the successful initiative used in their nail-biting 31-30 semi-final win over Saracens they have decided to extend the idea for the final against ASM Clermont Auvergne.


Bath have also sold 300 special commemorative shirts for the big match, and fans have been warned to grab theirs quickly as only a handful remain in the club shop.

Reaching the final of the European Challenge Cup is Bath Rugby’s biggest day since they raised the Heineken Cup in 1998.

Crucially, it offers them a lifeline for Heineken Cup rugby next season.

Bath missed out on automatic qualification via the Guinness Premiership due to their eighth place finish, and now must win the European Challenge Cup in order to take their place at Europe’s top table.

But one of France’s top sides stands in their way, Clermont have been consistently brilliant in the Top 14, and unbeatable in Europe. They cruised through the Pool stages without defeat and dispatched first Newcastle Falcons and then Newport-Gwent Dragons in the knock-out stages.

With  9,000 tickets sold for the final in the Harlequins home ground Twickenham Stoop, fans still have a chance to purchase tickets for the European Challenge Cup final by calling the Harlequins ticket office on 020 8410 6000.

Fans can no longer purchase tickets from Bath Rugby or ASM Clermont Auvergne.

The ticket office at Twickenham Stoop and gates will open to the public at 2.30pm on Saturday 19 May.