Finalists Tigers in action against Bristol 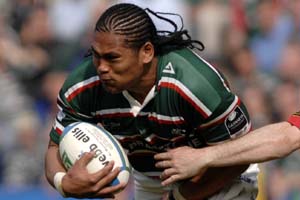 Heineken Cup finalists Leicester Tigers will play without the club's player of the year Alesani Tuilagi for the Premiership semi-final with Bristol on Saturday. - 04/05/2007 16:54

Heineken Cup finalists Leicester Tigers will play without the club’s player of the year Alesani Tuilagi for the Premiership semi-final with Bristol on Saturday.

Tom Varndell starts on the wing, Alex Moreno is named at tighthead prop and Leo Cullen comes into the second row, with Alesana Tuilagi, Julian White and Ben Kay named among the replacements after starting the win over London Wasps a week ago.

Sam Vesty and Dan Hipkiss continue their partnership in the centres, with Harry Ellis and Andy Goode selected at half-back.


Varndell is joined by Irishman Geordan Murphy and Fijian Seru Rabeni in the back three, while Moreno props down alongside George Chuter and Marcos Ayerza.

Leo Cullen takes his place next to Louis Deacon in the second row, with flankers Shane Jennings and Lewis Moody either side of captain Martin Corry in the back row.

Tigers go into the game on the back of one defeat in their last eight outings, with their only reverse coming at the hands of Saturday’s opponents in a re-arranged league fixture just under a fortnight ago.