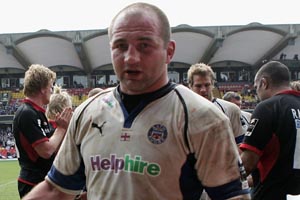 The captain will take his place in a pack that sees only one change since last weekend’s victory over Saracens in the semi-final of the European Challenge Cup, Peter Short replacing Andy Beattie at blindside flanker.


There are three changes in the backline: Michael Stephenson will start ahead of Joe Maddock at fullback; Chev Walker at outside centre, in place of Eliota Fuimaono-Sapolu; and Nick Walshe gives way to Andy Williams in the number nine shirt.

This is Bath Rugby’s last chance to notch an away win in this season’s Guinness Premiership, and although the team is confident that it can do so, Steve Meehan is conscious that Newcastle have a proud home record.

“It will require a massive effort from the guys,” the Head Coach said. “It will be our third week in a row on the road; we have poured an enormous amount of physical and mental energy into the last few weeks, culminating in that tremendous win against Saracens.

“It’s five months since Newcastle have been beaten at home. Leicester went there and were beaten, so were Gloucester, so were Saracens, so were Wasps. So we’re talking about quality sides, and from a Newcastle point of view it’s been good for them to keep their home record intact. But that in itself provides us with motivation and opportunities.”