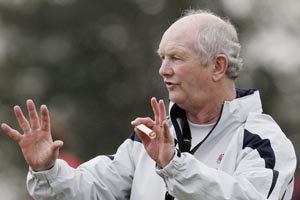 England Head Coach Brian Ashton confirmed that none of England’s players involved in the Heineken Cup and European Challenge Cup finals will feature in England’s two tests in South Africa.

Three English teams will compete for European club rugby’s top honours on the weekend 19 / 20 May when the club season reaches its finale in London.  Bath Rugby will face ASM Clermont Auvergne in the European Challenge Cup final at the Twickenham Stoop on Saturday, 19 May and the following day the Twickenham Stadium will host the epic clash of former Heineken Cup champions Leicester Tigers and London Wasps.


This success of the three English clubs has had a knock on effect on the national team who will play the Springboks on 26 May in Bloemfontein and on 2 June in Pretoria.

Firstly, the players will not have time to prepare and acclimatise for the first test match. Secondly, after their massive efforts spent in reaching the Heineken Cup and European Challenge Cup finals it gives this group of players the opportunity to recharge their batteries before meeting up again for the RWC warm up camps, which start on June 25th.

“Finally, I also feel very strongly that the players I will select for the touring squad must be trusted and respected to fulfil the two fixtures against South Africa.”

England stalwarts such as Harry Ellis, Martin Corry, Lewis Moody, Julian White, Joe Worsley, Josh Lewsey, Phil Vickery and Danny Grewcock will be among the players who will grace the European finals but will now not be traveling to South Africa.

The 32 man England squad to tour South Africa will be announced on Tuesday, May 1st.