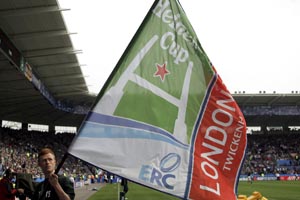 Derek McGrath, ERC Chief Executive responds to feedback from Leicester Tigers’ fans with regard to the Heineken Cup final.

I would like to acknowledge the emails and faxes we have received from Leicester Tiger supporters over the past few days with regard to the allocation of 9,500 tickets to Leicester Tigers for the Heineken Cup final on Sunday, 20 May at Twickenham Stadium. My thanks to those who took the time to get in touch with us and also for your support of the tournament.


As tournament organisers, ERC is challenged each year with creating the best possible showcase final for the tournament, for the two teams involved, the supporters who purchase tickets, for our partners and for our broadcasters who will transmit the game worldwide.

The ticket allocations for both finalists and the strategy for the distribution of final tickets was confirmed by the Board of ERC and announced to media and the clubs over 12 months ago. It is a strategy we have used for the past four seasons including last season’s memorable final at the Millennium Stadium. The ERC Board, which includes representatives from the RFU and Premier Rugby, seeks to maximize the potential for the final in terms of its promotional value and as a critical revenue source for professional clubs such as Leicester Tigers and London Wasps.

Therefore the Board set a capacity crowd and best possible atmosphere at Twickenham Stadium on Sunday, 20 May as the target for this season.

The weekend and venue for the Heineken Cup final 2007 was announced at a Press conference at Twickenham on Monday, 24 April 2006. The allocation of 15,000 tickets to be split by the two finalists together with a number of promotional initiatives for the final were also announced with the call to action “Book Early to Ensure You Get a Seat” for the Heineken Cup final. Tickets went on sale that day with prices starting at £25 and were promoted by our media partners and through the 24 participating Clubs.

The response from all the six participating countries was phenomenal, particularly in the UK, as fans, despite not knowing who would be in the final, snapped up tickets so they could see the two best teams from Europe battle for the title at the new-look Twickenham.

One of the promotional initiatives implemented included a “Club Cash Back” scheme run in association with the RFU that offered rugby clubs all over England the opportunity to purchase tickets and receive 20 per cent cash back for their Clubs. Many clubs in England including several from the Midlands took this opportunity.

By the end of the Pool stages the public allocation of 56,000 tickets on sale through ticketmaster and the RFU was sold-out with a significant number of those going to fans in Leicester.

The Heineken Cup is still a relatively young tournament and past experience tells us that selecting a venue and selling a final in the four weeks that follow the semi-finals simply will not allow time to create the world class event that all our stakeholders and supporters wish to be part of.

Experience has also shown that there are still only a few teams in Europe that have the numbers of supporters that can fill venues such as Lansdowne Road, the Millennium Stadium and Twickenham Stadium. Last weekend’s semi-finals highlighted this when 30,000 fans attended the Walkers Stadium and 16,000 the Ricoh Arena.

It is therefore necessary to pre-sell final tickets and encourage fans from all over Europe to join in the climax of the European season. ERC seeks to build the final each year by making it more inclusive yet still retaining around 15,000 tickets to cater for the two finalists.

This season that figure is 19,000 with both Clubs receiving 9,500 tickets. If either Club returns tickets they will be offered to the other Club.

The final in Twickenham on 20 May promises to be a great occasion with two great teams competing for the top club prize in Europe. I hope to see as many of you there as possible and I want to thank you all sincerely for taking the time to express your thoughts to us.