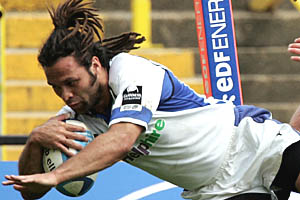 Victory over ASM Clermont Auvergne in the final of the European Challenge Cup would be a ray of light in an otherwise dismal season for former Heineken champions Bath Rugby. - 24/04/2007 16:54

Bath beat Saracens 31-30 at Vicarage Road on Sunday to reach the final of the European Challenge Cup but in the Guinness Premiership Bath have won just one of their last seven encounters.


In a bid to end that drought of Premiership victories Bath will travel to face Newcastle Falcons, who are coming off the back of nine home victories matches at Kingston Park.

Bath have won the last four meetings between the two clubs, with the Falcons last victory in the series being 33-18 at the Recreation Ground on 11 September 2004.

The European Challenge Cup may have injected some belief back into this side, with a outstanding winning margin over Bristol Rugby in the quarter-final and a keenly contested single point victory over Saracens in the semi-final.

Bath will face the fancied ASM Clermont Auvergne in the final, on Saturday 19 May kick-off 5:30pm.