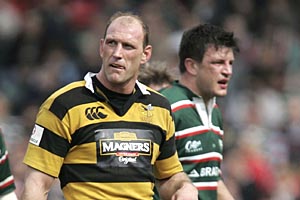 Leicester Tigers and London Wasps may face each other twice in the short space of time ahead of their clash in the Heineken Cup final at Twickenham.

It’s all to play for in the final Round of the Guinness Premiership this weekend. Wasps need to defeat the Tigers and hope other results go their way to make the Premiership semi-finals. Whereas a single point would guarantee qualificiation for the Tigers, but victory would secure a semi-final in Welford Road.

Both finalists have a strong record in European tournaments. Leicester are the only team in the history of the Heineken Cup to win the title in successive years – 2001 against Stade Francais in Parc des Princes (34-30) and 2002 against Munster in the Millennium Stadium (15-9).

Wasps also have two European trophies to their credit. In 2003 the London side won the European Challenge Cup and went on to win the Heineken Cup in 2004, defeating Toulouse in Twickenham Stadium (27-20).

The stage is set for what is sure to be a mouth-watering feast of rugby when the former champions Tigers and Wasps clash in Twickenham Stadium for the 12th Heineken Cup final.