It will be a worthy final – Dallaglio 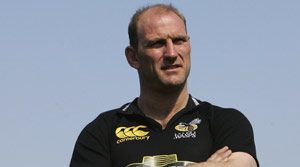 The two sides who have dominated professional rugby in England will serve up a worthy final at Twickenham, according to Wasps back rower Lawrence Dallaglio.

The former England captain says final opponents Leicester have set the benchmark for professional rugby and Wasps have added to that, so they are an appropriate pair of former champions to have fought their way through to English rugby’s HQ on May 20th.

Wasps saw off the determined challenge of Northampton 30-13 in the second semi-final at the Ricoh Arena in Coventry to clinch their place.

“It will be a worthy final. Leicester againt Wasps, the two sides in the English professional era who have probably dominated the domestic championship between them – Leicester are a great side and it is going to be a great battle,” he said.

“They have set the benchmark in the professional era and we have added our weight to that as well with a lot of championships, so we have got two former champions contesting this year’s final.

“They will go into the game with a lot of confidence, so will we. They are desperate to win silverware and have won the EDF trophy already, congratulations to them on that.

“Leicester and Wasps compete the A team championship final for second teams as well, so they are a team we know very well and have a lot of respect for them.”

Wasps fought back against Northampton after being 13-0 down during the first half, but eventually ran out comfortable winners.

“I think it was a question of time today. We played a little wide out in the first half and made the mistake of not holding on to the ball and we were a bit frustrated wtih ourselves at half-time,” said Dallaglio..

“The signs were there in the first half without finding the final piece in the jigsaw, but I don’t think the result was in any doubt towards the end.

“Once we started being a bit more direct and stopped throwing the ball around we clawed our way back into the game.

“We needed to play with a bit more power. Leicester showed what a great side they are by being bit more confrontational, direct and taking the legs out of the opposition before then moving the ball.

“We did the opposite for a while but then got it right.”