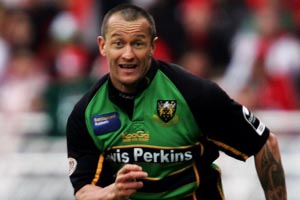 The former All Black, who limped off after quarter of an hour of last weekend’s narrow defeat at Adams Park, has recovered from his ankle injury and takes his place at outside half.

“After being very doubtful earlier in the week Carlos has made an amazing recovery,” said head coach Paul Grayson. “It’s testament not just to the medics but also his desire to play for the team.”

There are only two changes in the back-line. After missing a week’s action thanks to a facial injury suffered at Newcastle, the hero of San Sebastian Robbie Kydd returns at inside centre. Saints’ skipper Bruce Reihana, who filled in at 12 last week, returns to his more familiar position of full-back. Paul Diggin drops to the bench.

Up front there is a first Heineken Cup start for Matias Cortese. The Argentinian replaces Dylan Hartley, who is unavailable for selection under RFU Disciplinary Regulation 5.5.2 ahead of next week’s RFU disciplinary hearing.

“I’m disappointed for Dylan,” said Grayson. “Especially for an occasion such as a Heineken Cup semi-final.

“But Matias is a great player who will put his body on the line for the team.”

Dan Richmond comes on to the bench.

There are tickets available for the Heineken Cup semi-final from the Saints Ticket Office priced at £25 (£13 under-16s), £35 and £45. To guarantee your place at the biggest occasion the Saints have been involved in for some years call in person or telephone 01604 581000.