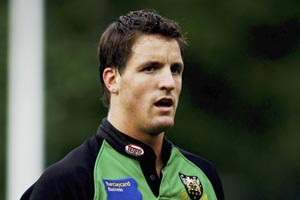 Northampton Saints’ David Quinlan has been forced to retire from rugby with immediate effect.

Upon reviewing results of a recent MRI scan with a neurosurgeon, Quinlan was left with no option but to call time on his career.


The centre will play no part in his side’s Heineken Cup semi-final shoot-out against London Wasps, meaning he finishes his European career with 22 appearances.

“It was my firm intention to see out the remaining year of my contract,” said Quinlan. “And it is with great regret that I’ve had to end my career in this way. Rugby’s been a massive part of my life for many years and I’m going to miss it greatly.

He made two appearances this year against Biarritz Olympique in the Pool stage and said, “It’s been a wonderful couple of years here at Franklin’s Gardens. I’ve loved playing for the Saints with some great guys and under some great coaches.

“And in all my time I’ve never come across such a welcoming and dedicated set of supporters as those at Northampton.

“I hope to contribute what I can for the remainder of the season to ensure that there will be Premiership rugby at the Gardens next season and European success this year.”

Winner of two Ireland caps, Quinlan arrived at Franklin’s Gardens in summer 2005 from Irish province Leinster. His first appearance in Northampton colours was against Gloucester and he went on to turn out for the Saints 35 times, scoring three tries.

“We’re disappointed to lose a player of his quality,” said head coach Paul Grayson. “It’s a cruel way for his career to finish this way. He put his body on the line time and again for the club.

“David played a big part in our success last season. He’s a very intelligent man and his understanding of the game is very good.

“We’re losing a leader as well as a well-liked member of the squad.”