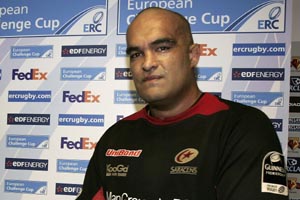 Saracens captain Simon Raiwalui has set his sights on putting the club within touching distance of European silverware... - 18/04/2007 10:47

Saracens have hit a rich vein of form and captain Simon Raiwalui has set his sights on coming through the all-England semi-final against Bath Rugby at Vicarage road on Sunday and putting the club within touching distance of European silverware.

“We have had a great run in the second half of this season and getting to the final of the Challenge Cup would be a great boost for us,” said the Fijian international lock.

“We’re obviously not looking too far ahead but bringing home some European silverware would be a great way to round off a good season. There have been some really strong sides in the tournament this year but we’ve put in a lot of hard work and we’ve come a long way so this is a great reward and we intend to go as far as possible in the competition.

“We are feeling really positive going into Sunday’s game against Bath. We are on good form and we know what we are capable of. We just need to go out there and do our jobs but obviously we know how good Bath are so it will be a tough match.

“Although we had a great victory at Vicarage Road earlier in the season, Bath are a different team now to how they were then. They have come together really well and dealt with a lot of the weaknesses in their game from the early part of the season.

“The second game this season was a lot tighter and we’re expecting more of the same so it will be great to play at home. The boys always love being at Vicarage Road, the supporters are great and we have a pretty strong home record.

“I think it’s actually harder going in against a team we know so well. Obviously there is the fact that we know their weaknesses and they know ours, but also it is much harder to put something together which will take them by surprise. We are both physical teams so the supporters can expect a real battle.”