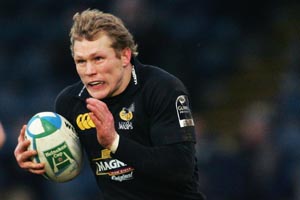 Even though Wasps picked up a vital bonus point to stay on course for a possible championship play-off place, Lewsey reckoned it was a poor performance.

“I haven’t been in a changing room before when we have won a bonus point and seen everyone so down. It was a massive game for both clubs because they were fighting for survival and we needed to win to stay in the play-off race,” said Lewsey.

“But we didn’t play well and all season we have been plagued by inconsistency. We’ve only played well in patches, although we strung together 60 good minutes against Leinster.

“On Saturday we have to maintain those standards for the full eighty minutes. It is a huge occasion for the players and the clubs and the prize is enormous.

“For me, the Heineken Cup is the best club competition in world rugby. As a player you don’t get many opportunities in your career to play in games like these and you have to make the most of them.

“Wasps have been in this position before and won. The semi-final win over Munster in Dublin ranks as one of my greatest days in rugby and going on to beat Toulouse in the final was fantastic.

“It would be great to be able to do that again – especially as nobody ever remembers who loses in a semi-final. That’s why there is a special feeling around the club this week.

“At this stage of the Heineken Cup, and with the kind of weather we are enjoying, the standard of the rugby sometimes edges that which you see at international level.”