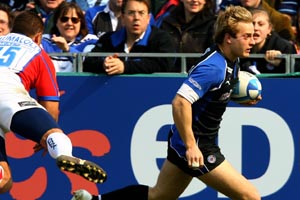 “Since we are secure in the Premiership and can’t make it into the play-offs, this tournament has become the focus of our season,” he said.

“Silverware is always the key to a club’s season and to have the opportunity to bring home a European title is a strong incentive for us.

“After being in the team who lost out to Biarritz in the semi-final of last year’s Heineken Cup, this match has a personal importance to me as well as the rest of the team.

“Being involved in semi-finals and finals is what we play for and to have got so far last year only to fall in the semi was a bitter disappointment and something we are hoping to put right this year.

“But Saracens are certainly the in-form side at the moment; you only have to look at the way they play and their strength throughout the team with a great set of forwards and lethal backs.

“They are going to be tough to beat.”

The match guarantees an England team a place in the final on the weekend of 18 / 19 / 20 May against either Welsh or French opposition.

“Home advantage is clearly something you always want, but Saracens are a really tough side home or away,” said Mears.

“That said, I actually like Vicarage Road because it is a great playing surface, but it can still be an intimidating ground and Saracens usually play very well at home.

“In Europe, the usual tactic is to concentrate on winning all the home games and then try and snatch a couple of away victories, so, to have come through the Pool stages undefeated, was a big boost.

“Along the way we got some good away wins, which is really encouraging.

“However, I don’t really know how to explain both last season, when we got to the semi-finals of the Heineken Cup when we were struggling in the league and this season when we have yet to record an away victory in the Premiership, yet we are undefeated in Europe!

“Suffice to say that playing in Europe is a big motivator for us.

“It is a great competition and everyone is always up for it and, once you build up a bit of momentum then confidence and form usually follow. I just hope it takes us through the match on Sunday.”