Healey backs Scarlets for the title 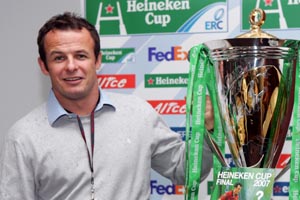 Double Heineken Cup winner Austin Healey has tipped the Llanelli Scarlets to lift the Heineken Cup this season, beating London Wasps in the final at Twickenham.

That is where his head tells him to put his money, but his heart would go with an all Midlands derby final between Northampton and his old club Leicester.

However he believes the Welsh region, the only non-English side left in the competition, have shown they have what it takes to lift the Cup by the way in which they beat former champions Toulouse and Ulster in the group stages and defending champions Munster in the quarter-finals.

“If I was going to bet now and be a risk taker, because it is so wide open at the moment, and took my heart out of the situation with Leicester then I would bet on Llanelli,” said the former England and Tigers star, a Heineken Cup ambassador this season.

“If you ask me who will be in it then I think it will be Llanelli and Wasps in the final, purely speaking statistically and based on knowledge of what is going on at the moment.

“It would be equally easy to see a Leicester Northampton final – which is the final I would love to see, a Midlands final for the Heineken Cup.”

Healey is backing the Llanelli Scarlets to beat Leicester even though his former team are the only one of the four semi-finalists that he tipped at the start of the season to reach this stage. He changed his mind about the Welsh region after they won in Toulouse.

“The semis are what a lot of people did not expect. It’s great to see Northampton against Wasps which just shows how strong the English clubs are at the moment,” said Healey.

“However you are not guaranteed a winner from the Premiership the way Llanelli are playing with ambition, taking sides on, challenging them all over the field. They have got some great players at the moment who are playing very well for their club but look ordinary for their country.

“If you look at how well the Scarlets have did in the contact area against Munster then you would say they are a match for Leicester in that area and around the field, it is just in the tight you would expect Leicester to get the upper hand.

“It is difficult to call but I think Llanelli are the favourites going into that game.”

If his verdict on that semi-final will surprise some people, he expects favourites Wasps to win the other semi-final even though he believes their much-vaunted defence is vulnerable.

“Strangely enough the Wasps defence is the easiest defence to break down if you get on top of it. If you let it get on top of you then it will rule you all day long,” said Healey.

“There are varying ways to beat the Wasps defence, staying on your feet in the tackle, breaking through the tackle and offloading or throw the ball across or a crossfield kick. If you can get around the outside man or pull the ball deep then their defence is completely shot.

“I am sure Shaun Edwards will laugh when he hears this, but Leicester Tigers scored a mountain of tries against Wasps purely because we practised it all week, knew what we had to do and we were able to counter it.

“Carlos Spencer has to go out there and put in a performance for Northampton that Keith Barwell has paid a million pounds for – he is the sort guy who has got to do it.

“If he knows how to beat Wasps and he sticks to the game plan then I think Northampton could surprise a few people.”

Of course the semi-finals are a difficult stage, so close and yet so far, but Healey believes it takes a positive attitude to win through to the final.

“I think you have got to go out and win the game. In the two semi-finals we won we scored tries, you need a bit of luck as well but you need to try to win the game as opposed to not losing it,” he said.