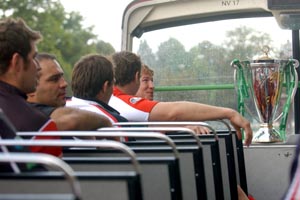 Today in London representatives of the six major European Rugby Unions and the International Rugby Board met to ensure the future of the highly successful Heineken Cup competition.

To achieve that, the Unions resolved to strengthen the governance of the Game which must rest firmly with the IRB and the National Unions as the elected guardians of the Game at all levels.


Furthermore the six Unions unanimously supported the decision taken yesterday by the shareholders of ERC that a European club rugby tournament will take place next season and that all six participating Unions will provide teams.

The establishment of a new five-year ERC participation agreement.

This agreement will see the six Unions as shareholders and will be based on club participation in France, England and Italy and provincial and regional participation in Ireland, Wales and Scotland. Each national Union will have the right to invite teams from within its territory to participate in the ERC according to its own participation criteria. It will be up to each Union to decide how it wishes to structure its shareholding and financial arrangements with its participating teams. The Unions look forward to working with the clubs, provinces and regions in promoting, marketing and developing the ERC competition. The Unions believe the English Guinness Premiership and French Ligue Nationale de Rugby (LNR) clubs should participate in the tournament next season.

The primacy of the Game’s governance rests with the national Unions.

Rugby has seen tremendous growth over the last 12 years but has still some way to go to establishing an enduring financial base. The Game can only flourish if it is healthy at all levels. The Unions are the only bodies set up to achieve just that. The Unions do not want to be confrontational but will do what it takes to secure the Game’s future.

No other new tournaments will be sanctioned by the six national unions and IRB.

This is an important consideration for the continued development and profile of ERC for all stakeholders including broadcasters, sponsors and supporters.

The RFU and FFR will invite the Chairman of the IRB to meet with Premier Rugby Limited (PRL) and LNR in the coming days.

This will take the form of two separate meetings.