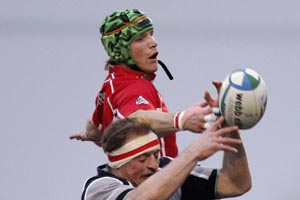 But while most of the region’s supporters have set their sights on on that big Walkers Stadium showdown, captain Easterby says the players are just as determined to maintain their bid for league silverware.

The Scarlets are currently fourth in the league and with only six matches remaining it appears a tough ask for the inaugural champions ahead of Friday night’s home clash with rock-bottom Border Reivers.

But the the Irish international flanker said: “Until it is mathematically impossible you have got to go all out for it.

“It is going to be a tough ask but stranger things have happened. It will take winning every one of our remaining games and for other games to go our way but we believe we have the ability and the focus in this squad to maintain our challenge.

“It is exciting to be at this stage of the season and still in with a chance of winning the title.”