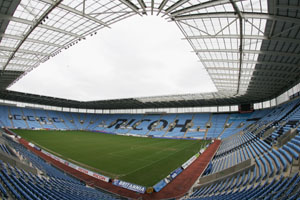 Northampton’s win in San Sebastian against Biarritz Olympique means that the Heineken Cup semi-final Northampton Saints V London Wasps will be played at the Ricoh Arena on April 22 (kick-off 3:00pm).

The game, which is set to be broadcast around Europe, is one of the biggest fixtures in world club rugby and will be expected to be a 32,000 sell out.

Daniel Gidney, chief executive of the Ricoh Arena, said it was another notable first: “This again means that the Ricoh Arena and the city of Coventry will be on the international map.

“The Heineken Cup is the Champions League of Rugby and considered by many to be the finest club competition in world rugby.”

Derek McGrath, chief executive of the European Rugby Cup, said the venue would be ideal for such a prestigious event.
“This is the highest level of the club rugby possible and we wanted a venue which reflects the standing of the match. The Ricoh is in the heart of the country and has already staged several major international events.

“Any game between two clubs from the same country is always eagerly anticipated and it should be a memorable day for everyone concerned.”