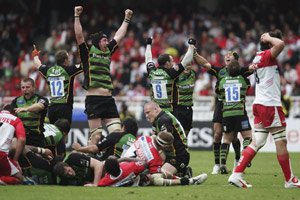 Northampton coach Paul Grayson was as stunned as the Biarritz fans after the Saints’ thrilling 7-6 Heineken Cup quarter-final win on Sunday.

Grayson said: “I think we were 100-1 in a two-horse race, which is quite wide odds, but that’s what sport is all about.

“In the big picture, we didn’t really think about getting a win because on paper, Biarritz should realistically have won. We wanted to frustrate them and keep the score close, because you never know when you are going to get something like an intercept to turn the game.

“What summed it up for me was when they tried a dropped goal at the death and half a dozen Saints players charged forward – they still had that desire to something impossible. And even when they were dead on their feet, no one strayed away from the way we wanted to play.

“It has been an incredible week, and an even more incredible day. The Heineken Cup is pretty special, but to come here, to such a loud and intimidating place, where you could be on the end of a good old-fashioned walloping, is I think only one word – incredible.

“We’ve got a massive game away to Newcastle, but right now, we don’t even want to think about that. We have made the Heineken Cup semi-finals against all the odds. It proves that on any given day, sport can turn up some bizarre results.”

Biarritz coach Patrice Lagisquet added: “I’m disappointed, angry and frustrated. Going into the game, no way could I see Northampton beating us.

“We dominated the set pieces and I was disappointed with a couple of refereeing decisions in the last minutes. Northampton did what they had to do and we should have closed the game down and got the job done.

“At halftime, I said we had to be patient and put away our chances, but we didn’t do it.”