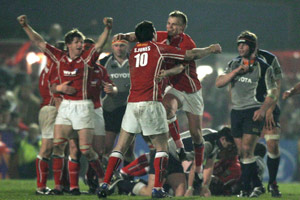 The Scarlets out-scored the holders three-two on tries to book a place in the semi-finals for the first time in five years.

.. Davies said: “It was a big occasion for the whole region and we’re just delighted to have produced a performance like that. It was an arm wrestle but we matched Munster for efficiency and intensity with plenty of skill as well.

“We had prepared well and we knew exactly the areas where we wanted to attack them. The back-row did very well in the contact area and that ensured we had plenty of possession with which to attack.”

Llanelli have now won seven out of seven in this season’s Heineken Cup and that has left Welsh fans dreaming they can go all the way for the first time in their illustrious history.

Davies said: “We’ve got momentum in this competition and we just want to keep that going in the semi-final but thee is still a long way to go yet.

“Whoever we play in the semi-final is going to be a huge challenge, both teams are very experienced but it’s great to be in the mix and now we can sit back and watch all the other sides bash seven bells out of each other”