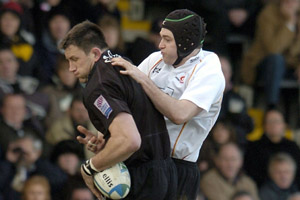 Dragons man-of-the-match Michael Owen is relishing the chance to clash with ASM Clermont Auvergne in France with a place in the European Challenge Cup final at stake.

“It is a one-off now against Clermont so it will be a massive task for us but that is what you want, you want those games coming at the end of the season and we have got one of those special occasions,” said the No 8 after his side’s 39-17 win over Brive.

.. “   “We can rise to it, we just have to show them what we are capable of at times and eliminate the sloppy parts.

“We will be flat out for the next three weeks – we have big games in the Magners but hopefully we can really up our standards and win this trophy.”

The Dragons took a 24-7 lead in the first half against Brive and never looked back, despite a strong fightback by the French side.

“It was not comfortable because they were a tough side but we played some good rugby in the first half. It maybe mirrored our season a bit in that we have got to try to eliminate those mistakes if we can win this competition,” said Owen.

“It is a massive competition to us because obviously last season we let ourselves down a bit and failed to qualify for the Heineken Cup and that was a massive blow for everyone, but this competition gives us a chance to make our mark in Europe and we have done that.

“It is a huge challenge but one we have got to thrive on and look forward to. We have to cut out those sloppy patches but if we do that we can match anyone and we can go there and win.”