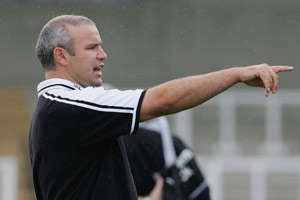 Newcastle Falcons have signalled their intent to book a European Challenge Cup quarter-final place by setting up base camp in Brive two days before the teams meet - 07/01/2008 15:12

The Falcons stormed back from 15-6 down at halftime at Parc des Sports Marcel-Michelin, but came up short as Australian fly-half Brock James inspired the French club to a 24-19 victory.

“I know exactly where this team is and over the last four or five weeks, we’ve played very well against some very strong teams. Tonight, we could and should have won.

“The guys felt before the game that it was winnable and they’re absolutely devastated. At the same time, I’m pleased with the strides this team has made forward.”

But Fletcher knows that his side needed to take their chances if they were to succeed at the highest level. “We had opportunities to hurt Clermont tonight,” he said.


“We had try-scoring opportunities that we didn’t put away and we knew that we couldn’t afford to do that.

“It was a very long journey down here. It was a long way to travel and we had qute a sluggish warm-up and first half. We were much brighter in the second half.

“The first try came from an individual error and you can’t legislate for that. But I’m pleased that we were comfortable playing against a top French side.

“We needed to make a big start to the game, but we gave Clermont too much respect and missed a few first-time tackles.

“We need to be more clinical in our defence and offensively, we should have just gone in there and attacked them.

“We’ve got several players who have been out of the team for a long time. They were a bit off the pace and so ended up out of position. But you also have to give credit to the opposition.

“We had one clear try opportunity where they knocked on and two more where we probably should have scored. But against a very good team playing away, you can’t afford to make those mistakes.”