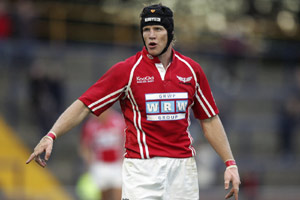 Simon Easterby says his Llanelli Scarlets side have been boosted by a double dose of good news ahead of Friday night’s big Heineken Cup clash against Munster.

Because not only is key opponent Paul O’Connell sidelined through injury, but Wales captain Stephen Jones was yesterday declared fit to play after passing a fitness test on his broken thumb.


And Triple Crown hero Easterby says the absence of rival O’Connell coupled with Jones’ timely return could make all the difference as the tension hots up ahead of the big Euro showdown in Wales.

He said: “It’s massive for us that he is fit. Stephen’s a talisman to the Scarlets and has been great for us all season. We are delighted he will be out there.

“And with Paul being out, it is a big blow to them as he’s such a good experienced player and leader of the pack.

“They do though have top quality replacements to come in and we are aware of that but we also know what a key player he is to how they function as a team.”

Easterby was a key figure during the recent successful Six Nations campaign for Ireland.

But the boot is now firmly on the other foot as he prepares to go head-to-head with so many of his international foes at Stradey Park.

But rather than looking to the battle within the pack of forwards, Easterby believes the fit-again Jones and British Lions fly-half pal Ronan O’Gara hold the key the winners of the last-eight tussle.

He said: “He’s a talisman us, just as O’Gara is for Munster.

“It is a massive duel between them and is probably going to shape the game.

“As forwards it will be important to give Jones the  platform, but those two know so much about eachother that whoever gets the upper hand will have a major say on the winners of the match.”

Not that Easterby will have any divided loyalties as captain of Llanelli.

So much so that the 31-year-old says the banter and war of words started with this Irish teammates weeks ago during the championship campaign.

“I’d be lying to say we haven’t spoken about it and there was a bit of chat,” he added.

“With Paul not playing, at least there’s one less person not to fall out with.

“For 80 minutes it’s against eachother and I will be doing everything in my power to beat them.”

Easterby and the majority of the Scarlets team know all about the agony of losing a home Heineken Cup quarter-final.

The blindside flanker played in the home defeats to Perpignan in 2003 and in the hefty 27-10 reverse, again in Llanelli, against Biarritz Olympique the following season.

But with a perfect six-out-of-six wins in this season’s European group campaign, it’s no surprise to see him confident of success as his side aim to make third time lucky when the defending champions come to town in 48 hours time.

He went on: “We are a better side now than we were a couple of years ago but we need to start winning some big home games.

“There’s more experience in our side now and have played some great stuff this season so we are ready for them.

“And we will have to be to beat a strong Munster side.

“They are a formidable bunch up front and are very well drilled.

“Year in year out they reach the knockout stages and a benchmark for a lot of the teams. “It doesn’t get much harder than this.”