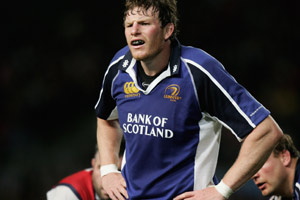 Malcolm O'Kelly has been with Leinster from Day 1 of their European adventure - and almost 12 years on the international lock is determined to do everything possible to see his Irish province crowned the champions of Europe. - 28/03/2007 10:38

Malcolm O’Kelly has been with Leinster from Day 1 of their European adventure – and almost 12 years on the international lock is determined to do everything possible to see his Irish province crowned the champions of Europe.

O’Kelly was in the Leinster team who won 24-21 in Milan back on 1 November, 1995, and recalls the match as one in which “a 24-stone man-mountain of an Italian player made it clear his objective was to make sure this 20-year-old did not get off the ground the entire afternoon. It was a good learning curve.”

Now, 54 further Heineken Cup appearances later, O’Kelly is still going strong in the heart of the Leinster pack as they prepare for their quarter-final against London Wasps at Adams Park on Saturday.

Leinster have made the knock-out stages for the sixth time in 12 seasons, a 50 per cent success rate in qualifying from the Pool stages, but now it is sudden death with no room for any slip-ups.

“This is a huge game for us – any quarter-final of the Heineken Cup is a massive occasion and challenge and we are really looking forward to the match,” said the 32-year-old.

“It does not really matter to us that the match is being played at Adams Park. With the work going on at Lansdowne Road we would have been away somewhere anyway so the fact that it is there is not that important.

“We are happy enough to be going to Wasps and it has all the makings of being a really great game.

“Our quarter-final performance in Toulouse last season attracted a huge amount of comment and praise – and it still does – but that is the way we like to play and that is the way in which we are most successful.

“However, set pieces seem to take on greater importance in Heineken Cup matches than in the other tournaments so we are trying to break that mould.

“Wasps are a very rugged and aggressive side, strong at the breakdown area and good at stopping other teams from playing, so it will be very important that we create plenty of phase play to counter their strengths.”

While Munster and Ulster Rugby have both won the Heineken Cup – Ulster in 1999 and Munster the reigning kings of Europe – Leinster have fallen at the semi-final hurdle three times, 23-14 to Cardiff in 1995, 21-14 to Perpignan in 2003 and 30-6 to Munster last season.

“We have reached two semi-finals in the last four years, we were fancied both times but failed to produce on both occasions,” said O’Kelly. “It would be huge to get to a final, we all want to be involved in that, but first things first and we have a tough quarter-final to play on Saturday.”

And Leinster will be without injured Ireland captain Brian O’Driscoll – O’Kelly adding: “Obviously Brian is a great player and a great captain and losing someone as talented as him is a blow, I really feel for him because he works so hard. But Leinster will survive. Yes, it is disappointing not to have Brian but we are more than a one-man team.”