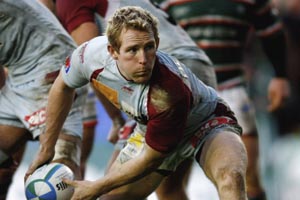 Former Munster scrum-half Mike Prendergast will join Gloucester this summer on a two-year deal from Bourgoin.

The 29-year-old fills the gap left by Haydn Thomas, who is joining Bristol, and brings with him a wealth of experience gained in Ireland and France.


A physical number nine, Prendergast started four of Bourgoin’s six pool matches in the Heineken Cup this season, and also knows what it’s like to run out at Kingsholm having been a replacement for Munster against Gloucester in 2003.

“He’s a different type of player to the other 9s at the club and I look forward to him challenging them to be first choice. This signing is a great example of the strength in depth we are building at Gloucester.”

Prendergast added: “When a club of Gloucester’s stature shows an interest in you, you’d be mad to ignore it. I know all about the passion of the fans and the atmosphere at Kingsholm – the miracle match is a night none of us who were lucky enough to be involved will ever forget.

“Once I met with Bryan Redpath and the other coaches it was a very easy decision to make. Gloucester have got a set-up and a squad that can take on the best in Europe, so to be able to play a part in that is fantastic.

“I’ve had a great time at Bourgoin but am really looking forward to moving to England in the summer and getting stuck in.”