Heineken Cup quarter-finals – did you know? 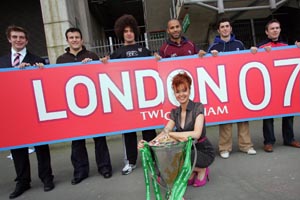 Read all about the 40 Heineken Cup quarter-finals played so far in twelve years of the Heineken Cup that have been watched by 789,893 fans.

The average attendance for each of those quarter-finals has been 19,747.

The two quarter-finals played at Lansdowne Road attracted capacity crowds and a joint tournament quarter-final attendance record of 48,500. The 2004 / 2005 match was between Leinster and Leicester Tigers and the 2005 / 2006 clash between Munster and Perpignan.

Munster are appearing in a record ninth quarter-final – one more than treble champions Toulouse.

There were no quarter-finals in the first season of the tournament, the four Pool winners from the 12 competing teams going straight into the semi-finals.

None of the 40 quarter-finals has required extra time to establish a winner – although two of the 11 finals (1996 and 2005 and both won by Toulouse) have needed the extra 20 minutes along with the 1998 semi-final between Toulouse and Brive. Toulouse lost that one on a try count.

The 2006 / 2007 quarter-finalists have a total of 42 previous quarter-final appearances between them. The tally is made up of Munster (8), Leicester Tigers (7), Llanelli Scarlets and Stade Francais Paris (6 each), Biarritz Olympique (5), Leinster (4) and London Wasps and Northampton Saints (3 each).

The highest score in a quarter-final was the 71 points scored by Stade Francais Paris when they beat Pontypridd 71-14 at Stade Jean-Bouin in the 1998 / 1999 season. The 57 points difference is also the biggest winning margin.