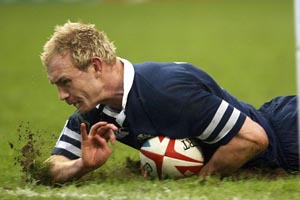 Heineken Cup side Edinburgh Rugby has bolstered the squad for next season by signing four new backs, all of whom have played for Scotland in the IRB World Series Sevens.

Scotland A international Calum MacRae joins from the Border Reivers. In this season’s Heineken Cup the 27-year-old started in all of Borders Pool games scoring 52 points.  He played in the Scotland A victory over Italy last month as well as in all three matches in the Barclay’s Churchill Cup in June 2006 and against Australia A last autumn.


Scotland Sevens star Andrew Turnbull will return north of the border after a season with Rotherham Titans. Formerly a full-time sevens player, his try tally of 46 makes him Scotland’s highest ever try scorer on the IRB circuit.

Also joining Edinburgh is centre John Houston who played in Scotland’s club international victory over their Irish counterparts at Meggetland last Friday. John captained the GB sevens team to the silver medal in the World University Championships in August 2006.

Mark Robertson moves to Edinburgh from the Border Reivers where he is an apprentice. The 22-year-old made his Heineken Cup debut for Borders this season. His try in last season’s club international against Ireland at Donnybrook was selected as try of the year at the Scottish Rugby Awards ceremony in May 2006.

Speaking on his move to Edinburgh, Calum MacRae said: “I’m looking forward to next season. I have played against Edinburgh a lot over the years and they play an attractive type of rugby which is one reason I am moving. There is also competition for places which can only be a good thing for the club and I’m looking forward to getting there and competing for a place in the team.”

Speaking on all four signings, Executive Chairman Alex Carruthers said: “We are delighted to have strengthened the squad, especially ahead of what will be a difficult period, during a world cup year.

“When we took over Edinburgh, we were acutely aware of the size and composition of the squad and these signings will give us significant cover across the backline for next season and beyond. The fact they all have sevens experience shows that they have both the required rugby skills allied to pace, which will allow us to play in a manner consistent with Edinburgh.”

In acknowledging that the players are all Scottish, Carruthers added: “This further outlines our commitment to showcase the talents of the best Scottish players from the academy, club and pro game. The fact we have also brought Andrew back to Scotland outlines that some players would prefer to ply their trade north of the border in order to enhance their international aspirations. All of the players have previously worked with Rob Moffat and this shows the high regard in which Rob is held by the players.

“We look forward to their contribution on the field next season.”