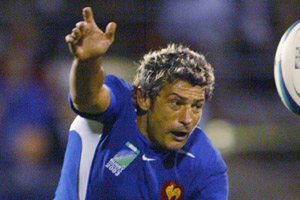 Double Heineken Cup winner Christian Labit signed for Heineken Cup quarter-finalists Northampton Saints as they strenghten their cover ahead of the clash with Biarritz Olympique. - 07/03/2007 10:05

Double Heineken Cup winner Christian Labit signed for Heineken Cup quarter-finalists Northampton Saints as they strenghten their cover ahead of the clash with Biarritz Olympique.

Labit who has played in 17 tests for France, has moved from Top 14 club Narbonne in the wake of injuries to both Daniel Browne and Mark Easter, with Saints No 8 Mark Hopley still recovering from an ankle injury sustained last weekend.


The 36-year-old returned to his first professional club Narbonne in 2005 after spending eight seasons playing for treble Heineken Cup champions Toulouse. Labit won two Heineken Cups with Toulouse in 2003 and 2005, played for France during the 2003 Rugby World Cup and won two Six Nations Grand Slams in 2002 and 2004.

Head coach Paul Grayson said: “Christian is a hugely experienced player and will help us for the remainder of the season. He is physical and determined and will take the pressure off our recovering No 8s. I hope he enjoys his time at the Gardens.”

Labit flew in from France on Monday night and signed his contract with Saints on Tuesday following a medical examination and a squad training session at the Northampton Academy school. He is in the process of being registered by the RFU to make him available for selection for this weekend’s home game against Gloucester (KO 3pm).