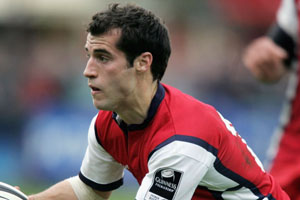 European Challenge Cup quarter-finalists Bristol Rugby announced the signing of scrum half Haydn Thomas from Gloucester on a two-year deal. - 28/02/2007 11:13

European Challenge Cup quarter-finalists Bristol Rugby announced the signing of scrum half Haydn Thomas from Gloucester on a two-year deal.

Thomas is currently in his second season at Gloucester and was in the squad that won the thrilling 2006 European Challenge Cup final against London Irish in extra time at the Twickenham Stoop.


Bristol Rugby Head Coach Richard Hill, who coached Thomas in the England Students set up, is delighted with the signing:

“I know Haydn well from having coached him in the England Students squad a couple of seasons back and, of course, he played against us for Exeter when we played in Division One.”

“We need strength in depth at the number nine position given that we could well be missing Shaun Perry on World Cup duty next season. With Haydn and Brian O’Riordan, we will have two young scrum halves who both possess plenty of experience.”

“He has a good pass and is quick and strong, capable of making breaks. He’ll be a good signing for us.”

Thomas will join Bristol Rugby during the summer in time for preseason training.