Foley in fitness race for quarter-finals 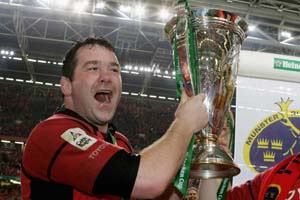 Anthony Foley may not be able to recover in time from a groin injury for the Heineken Cup quarter-final against Llanelli Scarlets in Stradey Park.

Foley injured a calf in the Heineken Cup game against Leicester Tigers at Thomond Park and his recovery has suffered a set-back that will see him struggle to be fit in time for the clash with Scarlets at the end of March.


The 34-year-old has 79 Heineken Cup caps and holds the record for the most Heineken Cup games played in the history of the tournament. The influential back row player played in three Heineken Cup finals with Munster and captained the Red Army when they lifted the trophy in 2006 in the Millennium Stadium in Cardiff.

In other injury news for Munster Trevor Halstead who looks set to make his return to action against Cardiff Blues in the upcoming Magners League game. The former Springbok was named in the extended Munster squad for the game against Borders but didn’t make the match day squad as management felt it prudent to give him a little extra time to recover.

John Kelly popped a rib cartilage after twenty minutes in the Round 6 Heineken Cup clash against the Tigers and although well on the mend, it will be next week before there is a clear indication of when he will be fit to return for the game against the Blues.

Munster’s win last Friday in Netherdale coupled with Connacht’s defeat against Ospreys at the Liberty Stadium in Swansea, puts more daylight between themselves and Michael Bradley’s side in their quest for Heineken Cup participation next season.