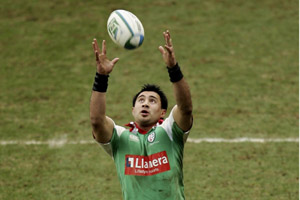 Heineken Cup quarter-finalists London Wasps announced that fly half Riki Flutey will be joining the club from London Irish, on a 2 year contract for the start of the 2007-8 season.

Flutey, the former New Zealand Maori, has played two seasons with the Exiles since his debut in October 2005, against Wasps in the Powergen Cup, and has scored an impressive 272 points including 15 tries in his 36 club appearances to date.


Wasps Director of Rugby, Ian McGeechan said, “We are very excited about signing Riki for Wasps next season. He is a quality player with ambition to win things, and he will add to the potential of our midfield and help take us forward in what we are trying to do to take the club forward.”

Flutey’s arrival coincides with the departure of centre Ayoola Erinle from Wasps. Erinle will leave Wasps by mutual consent at the end of 2006-7 when his current contract with the club expires.

Erinle debuted for Wasps in 2002, but 2004-5 was his first major season with the club, when he vied with eventual winner Tom Voyce for the title of club top try scorer and was rewarded for his fine form with a first call up to the Churchill Cup that summer.

Erinle has since gone on to rack up 26 tries in his 106 appearances for the club to date.

McGeechan said of his departure, “Ayoola is a talented player who has put in some fine performances for Wasps in his five seasons with the club. We wish him well in the future and for the new challenges that next season will being from him.”