Bruce Reihana returns to the pitch 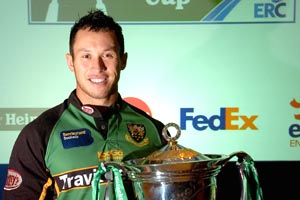 Northampton Saints players will be saying their prayers that the former All Black will be fully fit for the Heineken Cup quarter-final against last years finalists Biarritz Olympique.


The English side have suffered numerous injuries this season. In fact, Daniel Browne and Mark Easter picked up new injuries in the recent game against Bristol and are likely to be out for four to six weeks each with a fractured hand and ankle injury respectively. Carlos Spencer also suffered a calf strain.

Former All Black, Reihana, is expected to play 40 minutes at Reading Abbey RFC at 7.30pm.

Reihana, who suffered the injury against Gloucester on the fourth weekend of the Guinness Premiership season, will feature among a young squad of players that includes England U21s players Charlie Beech and Phil Hoy, and England Sevens players John Brake and David Smith. Reihana is expected to start at full-back.